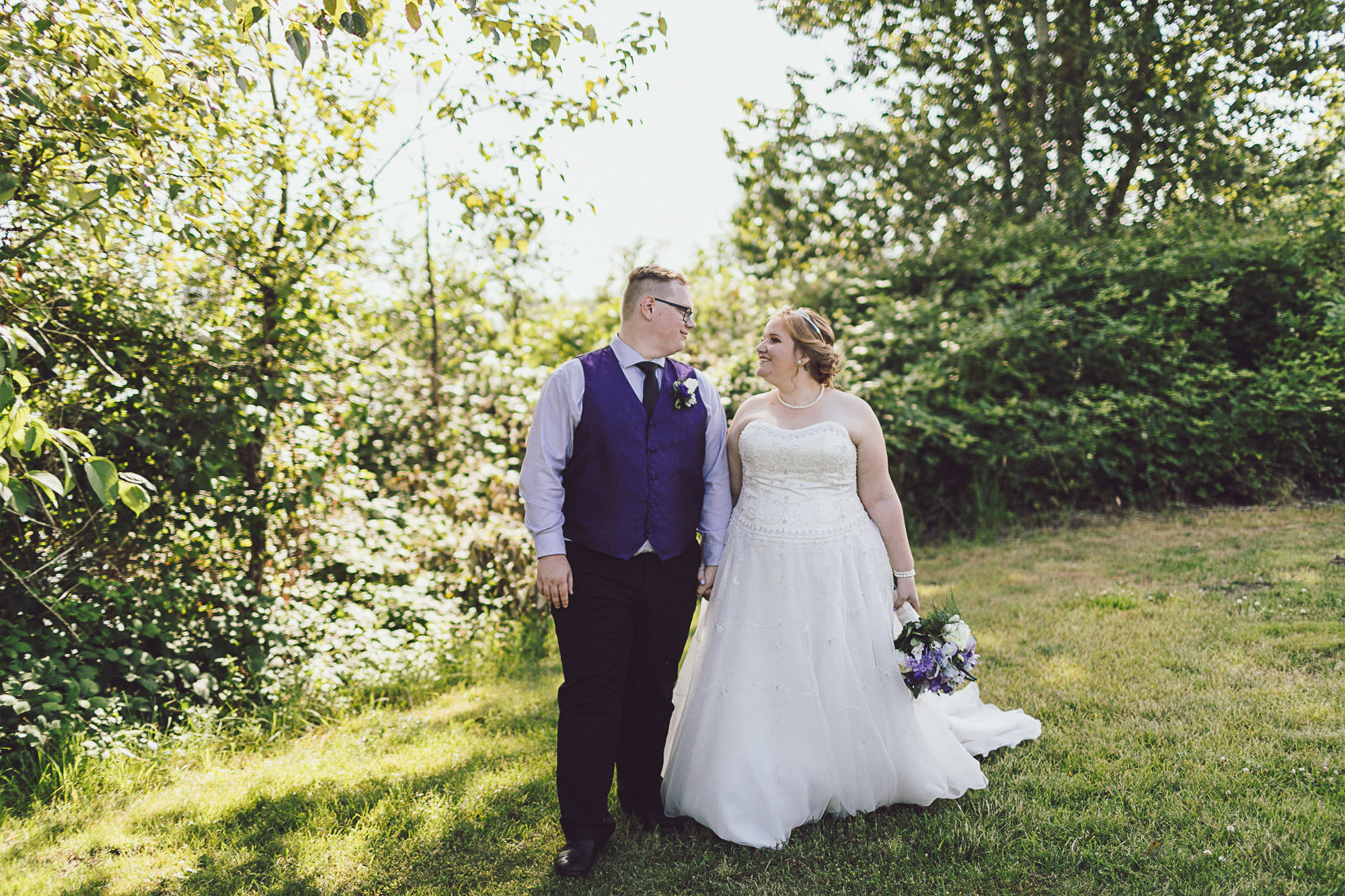 The rain clouds stayed away, the sun shone through, and Lindsay and Eric had the most beautiful and thoughtful wedding, surrounded by their closest friends and family. Lindsay and Eric chose to get married at their home church, Grace Community Church in Pitt Meadows, and it was an honour to be there with them as they shared vows with one another!

Lindsay and Eric first met on Tinder, and then first met in person September of 2017. A year later, in November of 2018, Eric asked Lindsay to be his wife, and 6 months later, they got married on the most perfect day! Last year, we did their engagement photos at Lafarge Lake in Coquitlam…check them out here!

Lindsay and her girls (and family who flew in from Ontario) got ready a few blocks away at a friends home, and you could feel there was something special in the air that morning…Lindsay was so excited to get married! All the planning, preparations, family and friends flying in..her wedding day was finally here! The girls got their makup done, got into their beautiful dresses, and after some help from her sister Corrie, Lindsay walked down the staircase in her wedding dress, just looking stunning!

Eric and his boys got ready at the church, hidden away in a backroom. Eric showed the guys how to tie their ties, and a few minutes ater (seriously, guys get it easy!) they were all ready to go! They got some slurpees, and were all set for the ceremony!

With the church sanctuary beautiful decorated in purple details and warm string lighting hung from the ceiling, Lindsay walked in with her dad, and Eric was just beaming with joy! Their ceremony was filled with thoughtful words from their pastor, sweet promises in their vows, and lots of laughter in between. It was such a special moment to be a part of! Once they were pronounced husband and wife, they signed their registry, and walked down the aisle!

We found the perfect shady spot behind the church for some fun family photos, and afterwards, Lindsay and Eric, with their wedding party, headed down to Osprey Village, the cutest little area right by the Fraser River! The sun came out for their portraits, and Lindsay even ran to see her first-ever ice cream truck….she ony thought they were a movie thing! We took the couple aside for a few minutes for some portraits of the together, and I loved the way they kept on looking at eachother….they were so happy!

Back at the reception, their guests helped themselves to an awesome candybar, filled with the best of goodies, and nachos out of a giant sombrero! Once the wedding party was introduced by the MC’s (2 of the wedding party), dinner began! Lindsay and Eric chose tacos as their main course, and what an awesome and fun choice that was! Family and friends shared beautiful (and often funny) stories about the 2 of them, they played the ever fun “shoe game” (they were pretty close on most questions!) and Lindsay and Eric shared dances with their parents, before going around and just dancing with everyone!

As the evening was coming to a close, Lindsay and Eric asked their guests to join them outside, and everyone picked up a sparkler and lighter on the way out! After I helped position Lindsay and Eric, and their friends and families formed 2 lines on either side, everyone lit their sparklers, and the best send-off ever began! They drove off in their car, and the sweetest wedding ever was all done!

To the couple:
Lindsay and Eric, thank you for entrusting me with capturing your wedding day in photos that will last a lifetime, laughing at my awesome puns, and inviting me to witness the beautiful start to your marriage! I wish you nothing but God’s blessings as you continue to trust in him, and love each-other through whatever will come your way! I love you guys!

Their Vendor Team:
Andrew of Andrew Lukianiuk Photography captured the wedding in photos, Stephanie wore a dress from David’s Bridal, her shoes were purchased at Ardene, flower were made by Blooming Buds Florist, the gentlemen got their suits at Moores and The Modern Gent, and their cake was made by the NYA Cake Company.